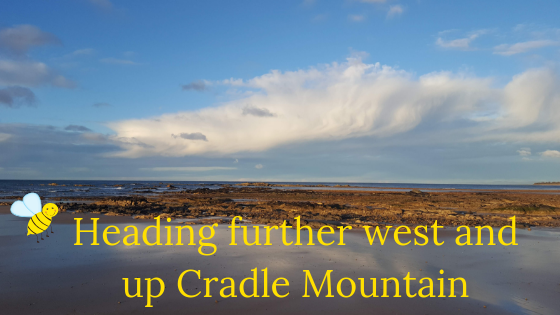 After our second night in Launceston, we headed further west towards Liffey Falls. 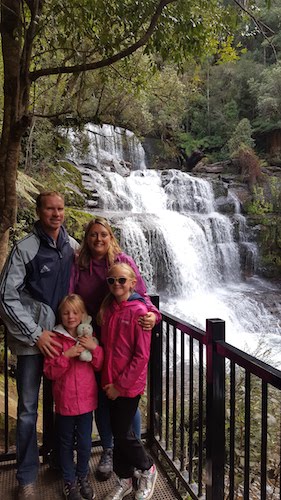 Our drive took us up some rather interesting roads – twisty and turning gravel roads with sheer drops – luckily our hire car did well despite us thinking we would be better with a 4×4! It was worth the drive though as we started walking down the short path, past the first couple of cascades and then onto the main falls which were absolutely stunning and one of the best waterfalls we have ever seen.

Retracing our steps through the rainforest we headed back to the picnic area for lunch.

Our journey took us further west through Elizabeth town and we found ourselves following the cradle to coast tasting trail and stopped off at House of Anvers where we purchased some delicious chocolate and read a little about the history of chocolate in Tasmania.

We continued west to Ulverstone where we had booked into the Big 4 site and on arrival had a lovely time dodging the showers to explore the beach.

After leaving Ulverstone, we stopped off to purchase some fantastic olive oil from Cradle Coast Olives – amazing flavour and has proved fantastic for cooking/drizzling both in Tasmania and New Zealand.

Heading towards the mountain, we had been told to expect snow and as we drove along the twisty roads we started to see snow on the trees and ground. As we approached Moina – the last place to stop before the mountain, we came round a bend and found that the traffic had stopped and the police were at the scene. It seems that further down there was a huge patch of ice, and after a chat with some locals and the police we were advised to turn back and try to come up again in a couple of hours. So we headed back to Moina for a drink whilst we waited, all feeling a little concerned that we may not actually make it up Cradle that day.

Thankfully, 2 hours later we decided to attempt the drive again and as the sun had come up the road was clear and we had an uneventful journey the rest of the way.

We popped into our hotel to get some general information and then headed to the visitor centre, where we are able to take the bus to the stunning Dove Lake where we walked, threw snowballs and built snowmen. 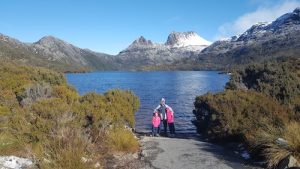 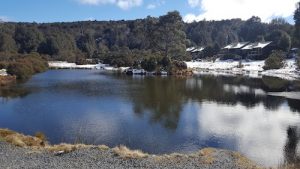 Back to the hotel for a hot bath, hot food and wine!

The next morning we were able to watch the local wildlife from our hotel balcony, before a hearty breakfast!

We wrapped up warm and headed back to the visitor centre to take on the enchanted walk – a magnificent walk with wombats and wallabies, as well as snow, rainforest and little tunnels for the children.

Feeling refreshed from this walk, we decided to go on a bit further and follow King Billy walk – this was like walking through Narnia, slightly longer than planned and a bit icy in places, but a walk we will all remember for some time to come. 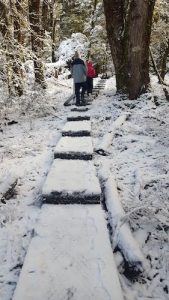 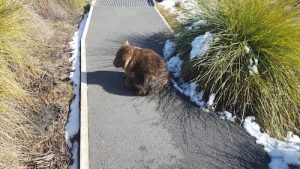 After refuelling with hot chocolate it was time to head down the mountain towards Strahan for the next part of our adventure.

Driving down the mountain

Our trip down was much less eventful than the one up, as we headed into blue skies and stopped off in the rather interesting town of Zeehan for everyone to stretch their legs and to grab a hot pie. This old mining town was rather eerie but had another great Tassie kids play area which the girls loved!

Further south we drove into Strahan where we were booked at Kitty’s Place for the night – a beautiful old Scandinavian style house. We explored the local park – which is adjacent to the school and the school has a way better play area and then headed back for a relaxed evening and yet another bath – believe me when you have been on the road as long as we have getting a bath rather than a shower is a huge treat!!! 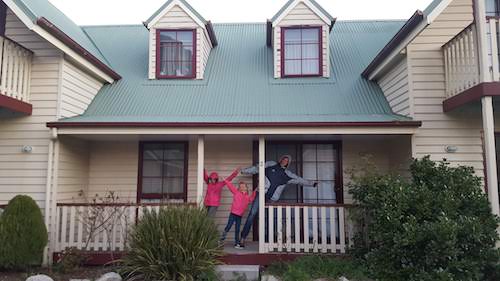