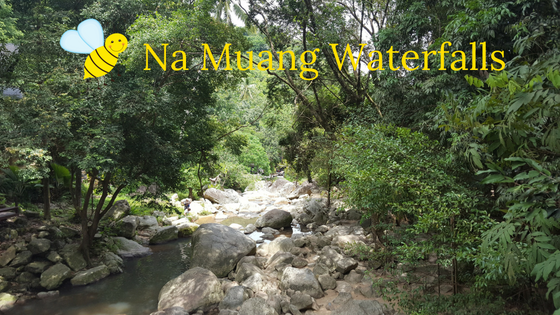 Whilst in Koh Samui we visiting Na Muang Waterfall, there are actually two waterfalls here and we had planned to just visit waterfall 1 as we had read that the path to the 2nd one is quite difficult especially for children. So on yet another hot day, we packed a picnic and our swimming gear and Dave took on the challenge of driving the 40ish minutes to the waterfalls.

They are well signposted and easy to find, but what we hadn’t appreciated is that you either have to park on the road, or (when following the signs) end up parking at the Safari Park which as we mentioned before is well known for its mistreatment of animals. Reluctantly we parked there and set off to find the waterfalls.

We somehow missed the sign for waterfall 1 (a lucky escape based on the TripAdvisor reviews as there a lot of chained elephants on the route there) and started walking up a steep road towards waterfall 2. There were well tarmaced sections or road and other dirt tracks but the views on the way up into the lush jungle were fantastic and despite the heat, we all made it! 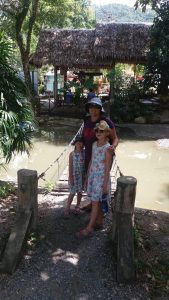 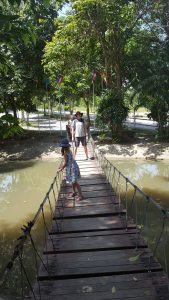 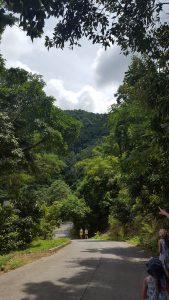 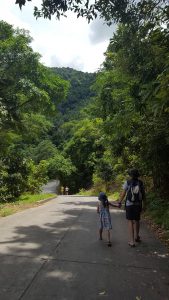 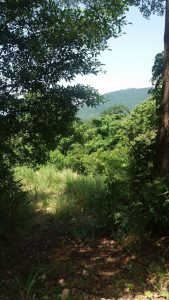 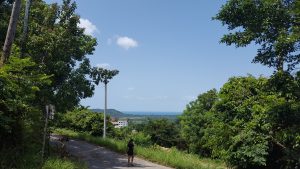 Following the waterfall 2 signs took us to a fork in the road and we headed right as signposted – this led us to a garden which required payment for entry – whilst this does give you access to the waterfall, you don’t need to pay so we walked back and headed left and down at the fork which took us to another path.

This was very dangerous as all the signs told us and we were walking along the wooden bridges at our own risk!!! Having survived the bridge we headed upwards on the well marked but steep path until we reached a pool and cafe. It was busy here so we headed further up and found another pool which was around 400 metres from the top – at this point, the path becomes even steeper and despite Sophie having done really well walking up we felt that this would be too far for her. 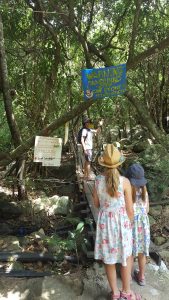 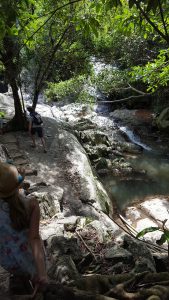 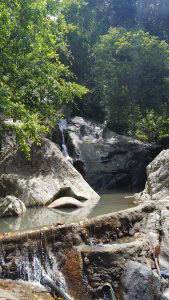 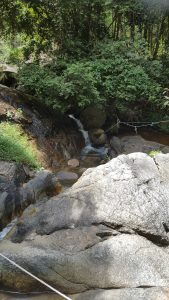 Swimming in the Waterfall

We quickly changed and explored the pools. The higher one was quite deep so we all spent time swimming in the smaller one. These pools are quite shallow in places but have a lot of rocks so take care. We also get nibbled by quite a few fish and were slightly perturbed by the waterboatman! 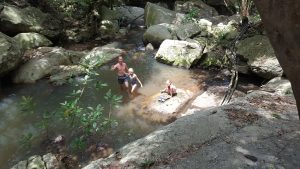 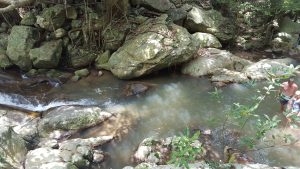 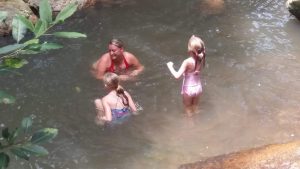 However, swimming in the waterfall was one of the most amazing things we have ever done and we all loved it!

After drying off we had our picnic and Molly went off to explore the rocks and soon came back to tell us she could see the top of the waterfall and had found yes another pool. We all headed over for a look but again decided it was a bit too far for Sophie. 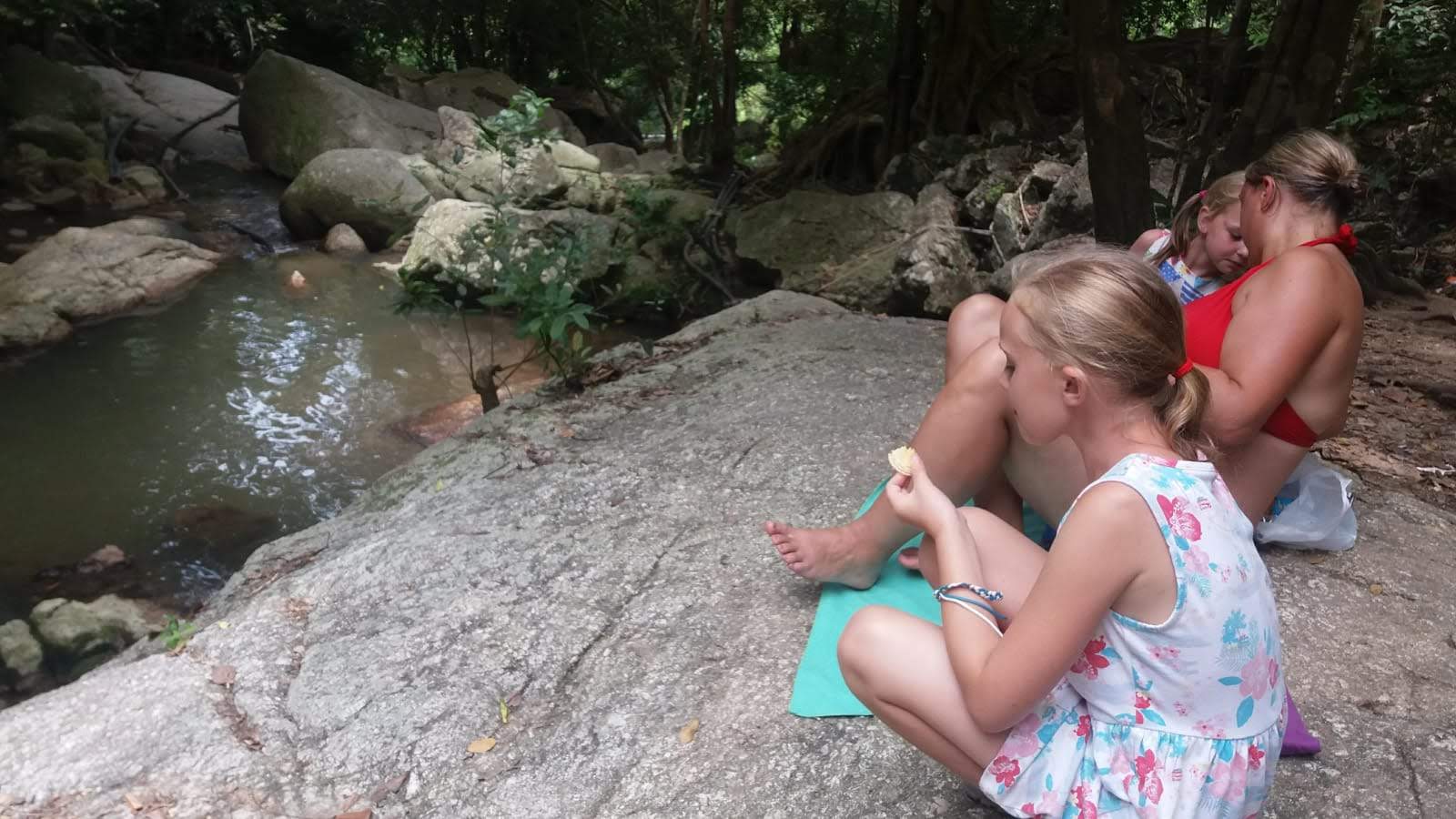 After drying off, we started the ‘dangerous’ walk down from the pools and back to our car. We found walking down slightly more difficult as there were a lot of loose rocks and the area had become busier so we had to pass other people as well. Once out on the main road, we were also playing a precarious game of dodge with the 4×4 tours! 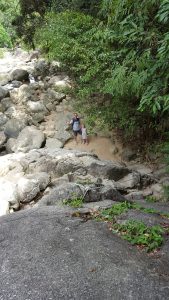 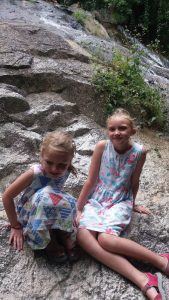 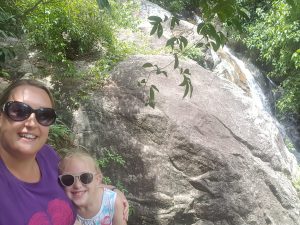 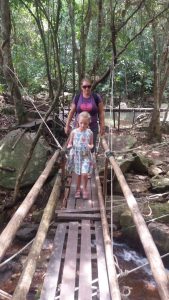 Safely at the bottom, we headed back to the car and went in search of ice cream to cool ourselves off.

We would highly recommend a visit to the waterfalls when you are Koh Samui, but if you find seeing animals in distress uncomfortable (as we do) be warned that sadly you will see some elephants caged and chained due to the safari park. We choose not to spend money there and if we were to return to Koh Samui in the future we would find an alternative place to park so as not to feel we are funding this awful abuse.